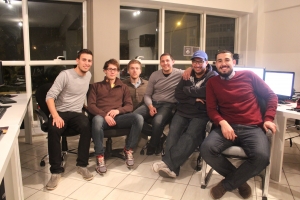 Wednesday: Agadir. After working for 8 hours at McDonalds, including a nerve-wrecking birthday party, me meet with Younes in the evening. He tells us how he, during a road trip, came up with the idea of bringing together bloggers so that they can exchange their experiences. With his mates Younes and Mounir he therefore initiated the Maroc Web Awards we attended a couple of days ago, and in addition organizes several conferences for Moroccan as well as international bloggers. Main business of the three founders is their company Synergie Media, established in 2007, which creates websites for Moroccan enterprises. Currently they also work on the internet magazine The Nexties which, in analogy to Techcrunch, covers the topics Web, Mobile and Technology and keeps a database of Moroccan companies. After recording an interview and shooting a good bye photo, we depart towards south the same evening. Destination: Legzira, a coastline popular for its arc-shaped cliffs.

Thursday: Visiting the arcs. Photoshooting with a wild dog. Continuing towards Sidi Ifni – a place obviously very popular among elderly European tourists. Breakfast in the sun, Working and drinking fresh orange juice at a café for a couple of hours. In the afternoon driving further south. Spending the night at rugged cliffs.

Friday: In Laayoune we meet a nice owner of a restaurant, who provides us with electricity and internet for the whole day. In the afternoon we get invited to home made couscous, a dish – he explains to us – which one can find each Friday in nearly every Moroccan family. In the evening we make our way a little bit further south and stay for the night at an impressive incline right next to the coast.

Saturday: Morning shower in the ocean. Departure towards Dakhla. Short stop at a camel herd. Police control at the roundabout right before the peninsula. Unbelted: 30€. Next to the road a giant flat sand area looks quite tempting for a test drive. Of course we get stuck. But: our sand ladders work! In the city we take a short walk around, after that we relocate to the Atlantic coast and watch the numerous kite surfers as well as the scenic sunset.

Sunday: Waking up with view on the ocean. Back to the mainland, short stop at a surfer camp. Again police control at the notorious roundabout, this time we are belted. After checking our brake lights, warning triangle, reflective vests and fire extinguisher, our new offense is the run out expiry date of the latter – at least we are able to negotiate to 10€. Driving further towards Mauritania. For the night we stop a few kilometers in front of the border. Moroccan soldiers come out of nowhere, but let us stay overnight.

Monday: Despite getting up early we already find a long queue in front of the gates. As the Moroccan border post opens at 09:00 am, cars start pushing and shoving randomly – we play cards. Shortly before 11:00 we proceed quickly: The officer is happy to talk some German with us as he had worked in Germany some time ago. Quickly towing two Senegalese a few meters, then fighting our way 4km cross country to the Mauritanian border post – apparently none of the both countries feels responsible for this section, instead of a road we find dirt tracks of different difficulty level. We take the adventurous way including getting stuck. Arrial at the Border post of Mauritania. An assistant routes us quickly through the different kinds of controls. Soldiers explain to us the techniques for proper headscarf wrapping. We leave our assistand behind upset, because his price is too high and he does not want to negotiate. Checkpoint Gendarmerie. Checkpoint Police. Checkpoint military. Next stop: Nouadhibou.
There we directly head to the train station, in order to get our L300 loaded on the popular Mauritanian iron ore train through Sahara desert, since we plan to continue our route via Atar. We are advised to return the next morning, and camp at auberge Abba, a nice, clean location right in the city center.

Tuesday: Again at the train station. After one hour of discussion we are told that the platform for vehicles will not be available. With or without car: We decide to take the train, since the ride is known for being quite an experience. After a delay of three hours we depart in the early evening – for free, because we climb into an empty ore waggon. The demand for this kind of transport is huge, whole goat herds are being loaded. Four sunny hours of riding through the sahara with unique impressions, followed by 8 hours in darkness, coldness, extreme dust, noise and shaking – the same time we start getting fever and stomach cramps. 400 km later it is 04:00 in the morning. We exit at Choum, a small town with 2000 residents in the middle of Sahara, and follow two guys from the waggon next to us because they mention the word “Hotel” and we really don’t have a choice. Together we drink a tee in some house – later we learn that it actually is a hotel – and join some other people already lying on the carpet in order to sleep.

Wednesday: We wake up at 09:00 am without feeling significantly better. It will be 9 hours until the first train to Nouadhibou arrives. Not capable of doing anything else, we lie around for ages and drink tea with the hotel owner and his friends. While getting a short city tour in the car we meet the chief of the local police, who personally accompanies us on our way back to the hotel. Again lying around for hours. Outside not much is happening. The sun is burning. From time to time some goats and donkeys pass by. As the train arrives we get to the station. This time we prefer the passager waggon, on which – to state it nicely – the ravages of time obviously have left its marks. Nevertheless we somehow manage to sleep during the 14 hour ride.

Thursday: Arrival at 07:00 am. Despite the adventurous journey we are fit and well. Straight to the auberge. The desert dust is everywhere. After a thorough washing ceremony we depart to Nouakchott, 450 km later we arrive in the dark. On the main road we are passed by a wildly gesticulating man in a car, who stops right next to us and poses as a drug police officer. Not wearing any uniform he presents us some “official badge” and orders us to follow him. We don’t trust him, he gets aggressive, we ignore him and start driving. He passes us honking, brakes in front uf us and starts yelling. At a red traffic light we outpace him and rest for a while next to a couple of policemen. The fact that our follower does not show up again confirms our suspicions. In the next internet café we look up another camping auberge which is located in a nice part of the city, with a nice court, a lot of international travellers, sand terrace and WiFi. The first mosquitos welcome us.

Friday: Spreading out to check Visa opportunities in Nouakchott. We meet “Tidi” Diagana, consul of the côte d’Ivoire, who friendly greets us in German. Piece by piece we get to know his fascinating live story, underlined by old black and white photos: Studies of architecture and urban development in France and Germany. Trainer certification in France, then national coach of Mauritania. Soccer professional at Hannover 96 in Germany. Unplanned high jump champion in France. Friend of Willy Brandt, former German Chancellor and Uwe Seeler, German soccer legend. Together with Charles de Gaulle and the first Mauritanian president he placed the foundation stone for Nouakchott, the capital of Mauritania. As an architect he currently is leading several building projects in different African countries. Also he educates young locals in craftmanship, to later enable them self-employment.
We are lucky to have had this nice, accidential encounter. Still at the same day we get our Visas.