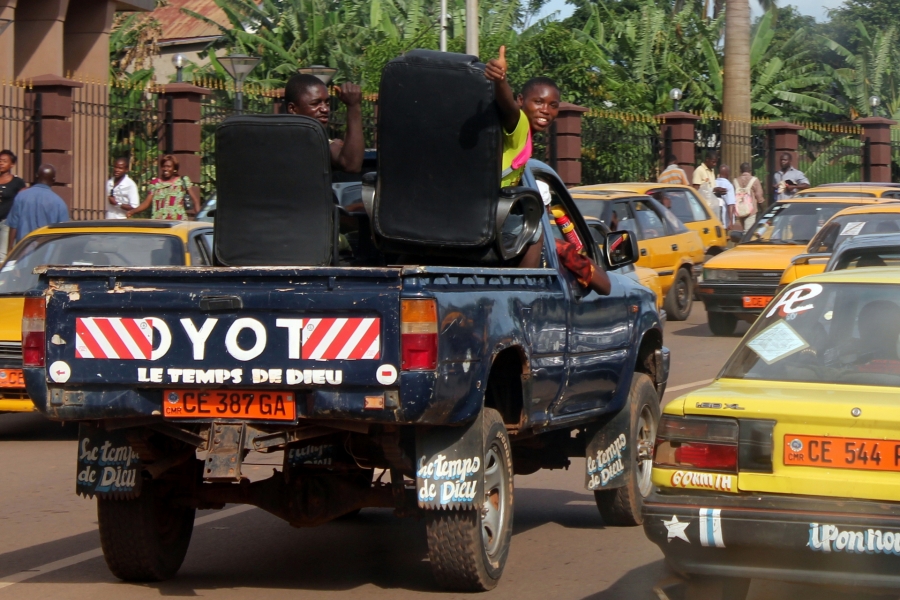 It is muggy and slightly clouded. The road is rough and either consists of mud or dust, but we are lucky: The rainy season has not begun yet. In this case our way probably would be impassable. In the last village in front of the border we invest our remaining Naira – the Nigerian currency – in 10 liters of gas as well as a mighty portion of bananas. The border officials are extremely friendly but still take their time doing the paperwork.

Next to us a 30-year old Cameroonian is sitting, telling us with great enthusiasm about the big church service he is just returning from – in Lagos, about 1000 Kilometers of jungle, mud and traffic jam away! It is a rip-off on a grand scale: Everywhere in western Africa huge advertising posters are installed next to the roads, promoting mass events held by dubious preachers – fee-based, of course. They talk about salvation, miracles and destiny and unfortunately find in the mostly uneducated, uniformly religious population an easy target audience.

Being outside again we have to fend off a group of young village boys, offering us their services as escorts. We cross a small bridge – the last meters on Nigerian territory – and then enter Cameroon. The solitary official rejoices over the visit, tattles about the illegible Nigerian passport stamps and afterwards calls his colleague in the next village. There, namely, two roads merge from different border crossings who share one single stamp. Thus, while we get in our car and start driving, the official from the other border post speeds towards the village.

Everything works out, and so we are on our way towards Buea, a small town located at the south-eastern side of Mount Cameroon – with 4095 meters the highest mountain in western Africa. 300 kilometers and masses of rain, mud and potholes (see photo evidence) later we reach our destination for the day and camp at the parking space of a catholic mission.

Spontaneously we decide to climb the mountain the next day. But already the question were the way up begins causes disillusion: As opposed to just answering, everyone responds “You need a guide?”. No, we don’t want a guide, we want to know where to start the way up. “That’s not possible! You need a guide!”. Obviously an ascent only is possible as part of a three or five day trip, including a guide and porters. The price: too expensive for our budget. At least we finally find out where the way up begins.

It is a cloak-and-dagger operation. Our alarm rings at 04:00 am, with oat flakes and milk we brace ourselves for the climb. The bag packs are stuffed with clothes, spaghetti-omelettes, cookies, muesli bars and water. All guides, porters and “that’s not possible”-people are sleeping. Hopefully. Headlamps on and go!

The first third of the way up goes through the woods. It is wet, slippery and pitch-black. Eventually we reach a first checkpoint which we pass unnoticed. The second checkpoint is a shack in which the three day tourists stay the first night. Someone notices us and shouts after us, we hurry up to get further. As we get out of the woods it is already bright. We register a person following us. It is one of the guides who was alerted by our observer. Endless discussions, finally we argue that we have experience with this mountain and it is not the first time for us. This way at least we only have to pay the regular national park fee and can continue.

As expected, the hike gets incredibly exhausting. The path is steep, full of debris and after about two thirds of the way it gets foggy around us. Further down it was too warm, even with a t-shirt – now we are surrounded by clouds, it is cold and windy. We meet more and more fellow hikers who stayed the night in one of the camps. Then – after an 8 hour ascent – we arrive at the summit. Heavy rainfall starts. A few hundred meters down the way we find a small hut and wait with a couple of others until the end of the rain. One hour later we continue the descent. We are completely run down as we reach the woods – the last stage. Due to the rain it is even more slippery than it was before. As we don’t feel our leg muscles anymore, we continue either frontwards or backwards or even crawling on all fours. The path seems not to end. Then, finally, the woods clear. Even the last kilometers of grass and asphalt stretch out horribly. At dusk we arrive at our car. We made it!

Our next station: Douala, the economic center of Cameroon. Again we camp at a catholic mission. As we are about to depart for our first appointment, we learn an important lesson: Staying overnight in a mission, one should know the mass schedule – during the service a whole courtyard gets converted to a parking space. 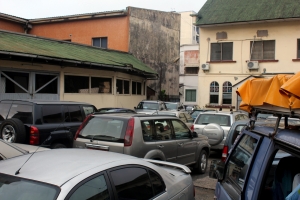 We visit the S2-GmbH, founded by the two friends Hervé and Durando. They got to know each other during their engineering studies in Germany. In Cameroon they now run a consultancy for renewable energies and sell business software for small companies. Besides that they are responsible for the Nuru project in Cameroon. It is an international project that aims to provide the rural population with electric light, running also in different eastern African countries as well as India. The concept is customized to suit the habits of the people in dealing with kerosene lamps:

As part of the Nuru project robust multipurpose lamps were designed, providing light for 9, 15 or 24 hours depending on the intensity level. The local dealer, previously the source of kerosene, is now the source of electrical charge. As part of the project he receives a device similar to a recumbent bicycle that allows him to recharge 5 lamps within 20 minutes. The charging process itself, however, requires credits in the device, which he is able to obtain from the project operators via his mobile phone – in total it is a full business model. The operators receive statistics of all devices online, they directly can get in touch with the dealers, identify problems and trends.

We continue towards Yaoundé, the capital of Cameroon. The road is mediocre, partly cluttered with potholes. Everywhere we see overturned Trucks in the ditch on the left and right side of the road. As we get to know later, the Germans funded a four-lane highway between Douala and Yaoundé. The actual road was built with two lanes – the other two lanes ended up in someone’s pocket.

As we arrive in Yaoundé we look for the guesthouse of André, a friend of the Nuru team in Douala. He speaks German and extensively travelled Europe in the past. Now he runs the FIIAA, a cultural center. He exhibits local art, organizes film evenings and cultural gatherings and has an extremely sympathetic beer garden in his backyard.

Again it is time for visa applications. This time: Gabon, Republic of the Congo and Equatorial Guinee. Again it is a tough fight. Equatorial Guinee: Impossible. A small, rich country – it has oil – that lets nobody inside. Only as Cameroonian one is allowed to file an application. Too bad. Congo: After some twists and turns we have all necessary documents. Handing over and waiting. 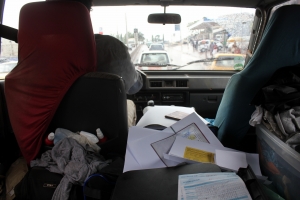 Gabon: The country currently experiences an oil rush, is rich and makes it hard to immigrate. Also for Cameroonians. Hence, the embassy is crowded at any time of the day. We get to know the “Dragon”. She works for the ambassador, likes to scream at the waiting people and tear apart application forms if she doesn’t like the signature. The highlight: Obviously we have to produce a confirmation of our expedition from the German embassy.

Heading to the embassy, we eventually end up at the German consulate by accident. Here we are reproachfully asked by an elderly official what we’re actually expecting, requesting a document during running operations. During running operation! We missed the German bureaucracy! We tell him about the Dragon and at least get an appointment the next day. This time at the actual embassy.

Here we make the acquaintance of Katrin and Adjoa, who are strongly engaged in the local music scene. They quickly help us with our problem and in addition invite us to a cabaret evening in Yaoundé. Thus, later we find ourselves in an alternative club, on stage is talented local singer. During the break the presenter doesn’t miss the chance to request three noticeable guests from abroad on stage… much to the joy of the audience.

The next day we meet Madiba, the founder of Kiro’o Games, a game design studio. We stand in front of a run-down building and don’t really know what to expect. But as Madiba takes us around in his offices we can’t believe our eyes: In the main room about 20 programmers and designers are sitting in front of huge flat screens, equipped with digital drawing boards. Everyone is working eagerly. The walls are cluttered with pencil drawings and time tables. The Kiro’o Games studio currently is working on its first big computer game: Aurion, a 2D adventure. What makes it special are, amongst others, the African influence on the characters as well as the scenario and the distinct level of detail.

The staff of Kiro’o Games consists of total Nerds – namely in a positive way! They are excited about discussing the effects of magic spells, the different features of swords as well as the minutest details of the characters motions. And: They know exactly what they are doing. The target audience of Kiro’o Games are not casual gamers but game lovers: Players that care about details and love a game because it goes in depth and is unique. Obviously they are on the right way. There are already a couple of investors, for instance from Canada, as well as multiple articles about Kiro’o in international magazines. We are absolutely inspired by this sympathetic group of people!

We say goodbye to André and go get our visa. Gabon: Check! Congo: restricted Check… due to a misunderstanding we only have five more days until we have to leave Congo. Five days! And we are not even in Gabon! We quickly have to head south.

The road is good, however we are stopped at checkpoints again and again. Most of them are friendly, others want to mend their wages by requesting fictional documents we don’t have – of course. In the evening we arrive Ambam, a small village at a bifurcation of the road: One way leads south towards Equatorial Guinee, the other one south east to Gabon. We have sandwiches with grilled beef – absolutely delicious but unbearably spicy.

Afterwards we camp in the bush about five kilometers in front of the border to Gabon, in the middle of nowhere. Classic.