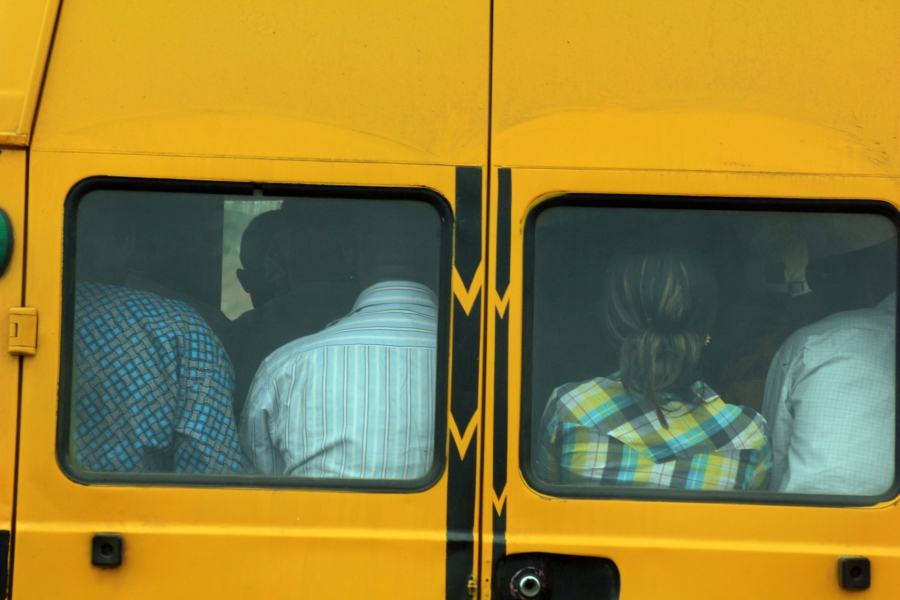 The sky is cloudy, it is a grey sunrise. The closer we get to the border, the more run-down and abandoned is the setting. The border village appears like a ghost town. Slowly we drive on a muddy path until stopped by the first barrier. People scurry around in the twilight, the atmosphere somehow feels unreal. We enqueue in front of a small booth where passports are stamped, continuously defending our position against audacious queue-jumpers. Afterwards a crabby police officer sitting on a wooden bench next to us waives us to come. He grabs our passports and in the usual slow pace copies our data in his notebook. Then he demands money. As we deny repeatedly he makes it clear that we won’t get back our documents. We head to the customs for now, where at least the Carnet is directly stamped. Then back to our corrupt friend and sitting it out wordlessly.

On the Nigerian side we sit in front of a chavvy police officer who, however, quickly realizes that there is nothing to get from us: We are dirty, sweaty and don’t even have an own pen. Police stamp, customs stamp, back to the car. A man gesticulates aggressively and knocks on our window, thereupon one of the staff makes unmistakeable signs not to open it. Quickly we pass the last barrier. On the 200 meters from the border to the highway a number of men without uniform are standing on the street, equipped with rollable nail boards and wooden clubs. They approach us, slightly knock on the car and make some signs we don’t understand. We unanimously decide to slowly drive on and try cut our way through the crowd. Indeed nothing happens.

The highway to Lagos has four lanes and its condition is alright. Every few kilometers we are stopped by heavily armed policemen and counter terrorist squads. Surprisingly all our encounters are friendly, welcome us in their country and wish us a nice stay – the very opposite of what we were told before many times. More than true indeed are the warnings concerning the Nigerian car drivers. They act totally wild and unpredictable and pose an absolute danger of life for inexperienced drivers.

Thanks to a friend’s friend we have a contact in Lagos, he is located in the north of the city. Since our highway along the coast directly leads into the southern parts, we plan to take a shortcut by switching over to a more northern parallel street. A severe mistake. Within a few minutes we find ourselves on one of the worst roads so far on our tour. What once was asphalt now is totally impassable, we follow the tracks in the mud next to it. For the last 20 kilometers to the city it takes us 2 hours. Then we are there – in Lagos, the largest megametropolis on the African continent.

After searching for some time we finally find the correct address. We stand right in front of a huge hall in the middle of an industrial area. There we are welcomed by Jonathan, our contact. We follow him into a large office where people are eagerly working in front of numerous screens. Bit by bit it turns out that we are right at the headquarters of the biggest venture of Rocket Internet in Africa: Jumia, the Nigerian Amazon.com.

Rocket Internet is a German investment company, founded by the brothers Marc, Oliver and Alexander Samwer. It is one of their main activities to implement succesful business models from the US in developing and emerging countries in order to quickly become market leader.

Jonathan gives us a tour through the facilities and we learn a lot about Jumia, for which he works as a manager. For us it is an interesting fact that Jumia, in contrast to Amazon, employs own drivers in order to deliver the purchased goods. However, it is a huge problem that street numbers are quite rare in many areas and therefore the delivery address often cannot be found the first time. For reason of purchasing power and infrastructure Jumia currently confines itself exclusively to Lagos and – in near future – Abuja. A nice detail: The majority of the employees is African and often it happens, that after the end of the work day people play loud music in the office and dance. 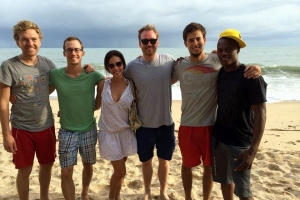 The following days we spend in the apartment complex of the Nigerian Rocket Internet team. It is located at Victoria Island, a rich residential area in the south of Lagos. We meet an internationally diverse group of managers of carmudi (car marketplace), hellofood (food delivery), Jovago (hotel reservation), kaymo (online auction) and Lamudi (real estate marketplace). They all work as expats in a position that most likely is not achievable that fast in the classical way in Europe. Of course the huge responsability comes with a lot of workload. But by common consent this matter of fact is compensated by the gained experience and the freedom to independently implement a business model in another country. Our highlights together with the Rocket team include a big barbecue as well as an afternoon at one of the numerous beaches – inclusive of a dolphin sighting.

During the day we are on the road, pursuing our own objectives. We visit the Co-Creation Hub and meet with Tunji, the manager. He tells us the story of two founders who had the vision to bring together people passionate for technology. Today the place is a venue for events, showcases, seminars and hackathons as well as an open work space including an incubator.

We talk to a series of founders with some interesting ideas:

– Topup Genie: recharging the mobile phone with credits by dialing a fixed number (in many African countries it is common to acquire credit by buying scratch cards on the street)
– Chop Up: social gaming for smartphones
– Church Plus: management software for churches
– Prep Class: online preparation for exams

Last but not least we sit together with the team of WeCyclers, a startup that pursues the goal to reduce plastic waste in the streets of Lagos. Their approach is based on gamification: Households collect their recyclable waste and receive points when it is collected, dependent on its weight. The points can be redeemed in exchange for money or items. Responsible for collecting the waste is a team of cyclists, equipped with a special construction for separately transporting the different materials. Since the beginning of WeCyclers in August 2012 over 850 tons of PET and 100 tons of plastic bags have been collected. After an individual presentation in the conference room the founders take us to their own workshop. Here the materials are stored and sorted for the last time, then they get shredded and finally sold to customers in Nigeria.

A further excursion leads us to an industrial area west of Lagos. There we meet Sajil, another Indian friend of Philipp who he met during his internship in Ghana. He gives us a tour through a factory for wire mesh fence, barb wire, nails and metal rods for which he works as a manager. On our way back to Lagos we take the route along the south side of Victoria Island and witness the ongoing mega- project „Eko Atlantic“: Through land reclamation a new city quarter of 10 square kilometers is created. It is supposed to become the new financial center of Africa as well as a highly modern, clean and sustainable residential area for 250.000 inhabitants. Of course it is an appropriate question who eventually will benefit from this project…

After a long stay in Lagos we again intend to move forward faster. Early in the morning we depart for Calabar, a city close to the Cameroonian border in the east of Nigeria, about 1000 kilometers away from Lagos. Some traffic jams throw uns back in time and we decide to take a shortcut through the south. It is a route we were advise against, since it crosses the province around the Niger delta – a region shaped by a long lasting oil conflict. We ask several locals, including military and police officers and are told that there is absolutely no problem in taking that way. It turns out to be true, but first of all another challenge is awaiting us: piste – muddy piste – flooded muddy piste. The residents are smart: Where the street is not passable, they offer driving through their backyard for a negotiable obolus.

Shortly before midnight we arrive at Calabar. Still the city is alive, the perfect roads – partly even scenic alleys – as well as the variety of hotels, bars and restaurants imply black figures. Where the money is coming from we learn the next day during a conversation with a couple of students: Some decades ago the local government started to promote tourism, apparently successful: Despite Calabar internationally is hardly known, it is the Nr. 1 holiday destination for Nigerians.

The visa for Cameroon is quickly organized. After several attempts due to some flooded streets we finally approach the border. It is already dark, the street extremely bad and as soon as we find a suitable spot next to the road we stop and call it a day. Again we are in the middle of nowhere, right in the heart of the jungle.