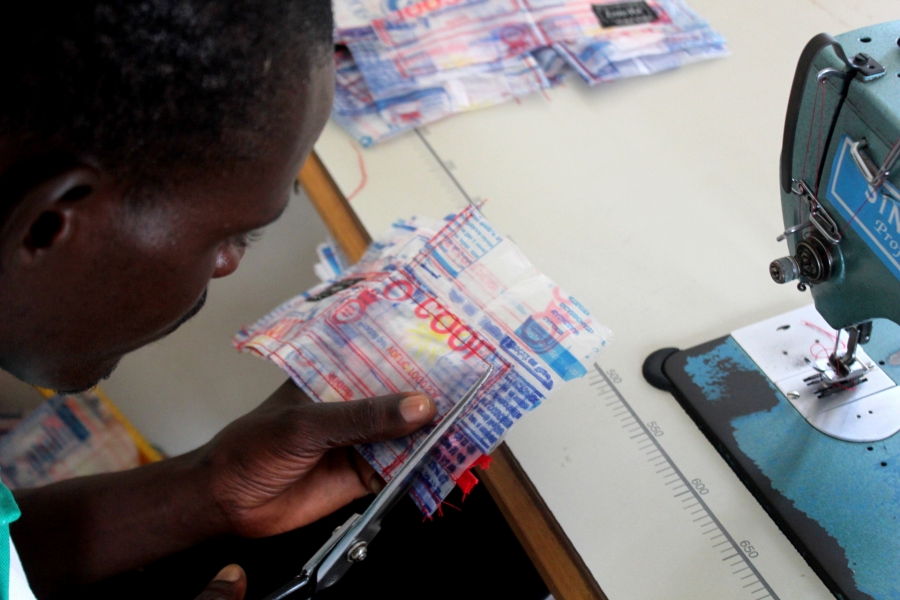 It is Monday. Picking up our visa for Angola: Check. Togo, we are coming!

Police checkpoint: Passports, vehicle papers, fire extinguisher, signal wests, triangle: Okay. Second triangle: we don’t have. Obviously a severe violation, as we are directly ordered into the office next to the road and urged to pay a 300 Cedi fine. The policemen are loud and aggressive. We try to solve the issue by being friendly, but the situation heats up. Finally we demand a random control of another car in order to see if everyone in Ghana really has two triangles. Unfortunately the driver reveals three triangles. Further discussion until we are proposed to go to the court. We explain that they can do whatever they want, we simply don’t have that much money. Silence. „How much money do you have?“. „30 Cedi“. The policemen look at each other nodding, we pay, apologize again and take a breath. Without further problems we reach the border… then the chaos begins.

Ghana border post: On a large dusty courtyard trucks, cars and pedestrians squash around. Policemen shout and gesticulate, self-appointed assistants rally around our car, knocking on the windows. People honk in front of us, people honk behind us. Meanwhile we know quite well how to manage an African border crossing. Where to get which stamp and which people actually have a say. These are usually the fewest. Therefore we reject each and every person who tries to give us orders. This way we don’t make friends, but at least get through at pace.

Togo border post: Again a large yard. We are waved on a parking spot. Without any hustle we get through the customs, then we line up at the immigration. Already from behind we see the bills every local submissively puts in his passport. As we are next in line, we are requested to pay 5000 CFA -about 9€ – for a ridiculous piece of paper with a stamp, of course there is no receipt. Without this we apparently don’t get our passport stamped. The surrounding crowd explains to us that one really has top pay here. We respond to the official that we don’t support corruption and he definitely will not see any money from us. Everyone stares at us, but it works. With our stamped passports and the stamped paper we walk to the car. There we hand it out to the waiting policeman who then wants us to pay 5000 CFA – this time it is for parking. We can’t believe this impudence. „We don’t pay. Goodbye!“ is our answer as we get into our car and leave. On the other side of the court we pass the barrier. Welcome to Lomé!

We directly head to the market and mix with the crowd. A premiere: baguettes with avocado, onions, tomatoes and oil, genious! After walking around for a bit we proceed to „Chez Alice“, the guesthouse of Alice, a most friendly Swiss who runs the place already for over 30 years. Furthermore we encounter a well familiar Dutchman together with his dog.

The next day we take a taxi into the city and visit WoeLab, a hacker space. There we meet a group of young people, most of them students, who work on technical innovations in order to improve their country. They present us the following projects – photos unfortunately are not allowed: 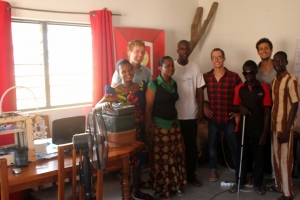 – Populating the Togolese OpenStreetMaps with up to date information. Indeed we already on our way realized the outstanding degree of detail in our Togo maps.

– The production of self designed 3D printers, built out of used computer parts. They plan to both sell them within Togo as well as exporting them to countries like Ghana, Ivory Coast or Nigeria.

– The production of cheap desktop computers. From old and partly defective laptops and PCs the parts which still work are taken out and put together in an old oil canister, resulting in a compact and really stylish computer. By returning an old device one gets a discount of 50%.

– Alienating old monitors to flower pots in order to bring plants into houses.

Subsequently we move on to KamZé, a project that aims to recycle used waterbags. These are known by the name „pure water“ in whole Western Africa and very popular due to their low price. Unfortunately they almost always end up on the street or the sewer. Schools and other institutions collect their used waterbags and give them to KamZé, where they get cleaned and processed to e.g. backpacks, purses and wallets by a group of 9 taylors. The major part of their products is sold in alternative shops in France. The next generation of products already is being developed, we are presented high quality purses made out of old plastic tarp for advertising.

In the evening at the guesthouse we get to Martin – to avoid confusion from now on called Togo-Martin. He is a real Africa veteran, since his youth being on the move criss-cross through the continent and a frequent guest of Alice for about 30 years. He tells us several stories, for example about his time in an African prison or selling a car in a currency which required the bills to be transported by a truck.

Also we learn a lot about Togo, since Togo-Martin has been selling rigs and trucks here for many years. In Lomé the only free port in Western Africa is located, even from Algeria dealers travel to Togo in order to buy cars and drive them back to the north. There is no importation tax for vehicles, only the tollkeepers in the harbour have to be bribed – because of this illegal income they apparently are rich people across-the-board. Togo-Martin says that meanwhile it is almost impossible to profitably sell cars in Lomé. The market is almost 100% dominated by Lebanese, many sell cars one third under the market price in order to launder money in their books with the difference. Also the activities of the Togolese president are not quite kosher. Having endless money he still flies to Italy once a week by his privat jet for „dialysis“. His wife apparently likes to spend huge amounts of money at Swiss jeweller‘s.

Before we depart the next day we pay visit to the free port out of personal interest. With a Libanese car dealer sitting enthroned on an elevated wooden platform we bargain over a used Mercedes C-Class. The price is high, just as the room for negotiation. Everyone who actually buys vehicles here the customs office is awaiting at the exit. And indeed: Already the appareance of the tollkeepers walking around makes it obvious that a lot of money is changing the owner here. We say goodbye and start making our way to Benin.

After a relaxed border we drive along a steadily changing coastline. We pass Grand Popo and move into the hinterlands to Ouidah, reportedly the birthplace of the Voodoo cult. After a short walk including a chitchat with a German speaking Beninese we decide to move on and not longer pursue the Voodoo. Too touristic seem all temples, markets and other places.

In Cotonou after a longer search we find the guesthouse „Le Guesthouse“, run by a French couple. The following days we spread out discovering the city. The crowds of mototaxis speeding around are quite noticeable, despite their own lane posing an acute danger for inobservant pedestrians. Of course we don’t miss out on an own ride. Out of interest we stop by the Voodoo section of the grand market and quickly find that we can’t really see the point of watching meaningless killed, dried and cut animals.

Before we move on eastbound we get more and more excited, since we are going to approach the border to Nigeria. More specifically the southern border with direct access to Lagos – with over 20 million inhabitants the largest city in Africa – which many people referred to as the „hardest border in Africa“. We decamp at 05:00 o’clock in the morning…