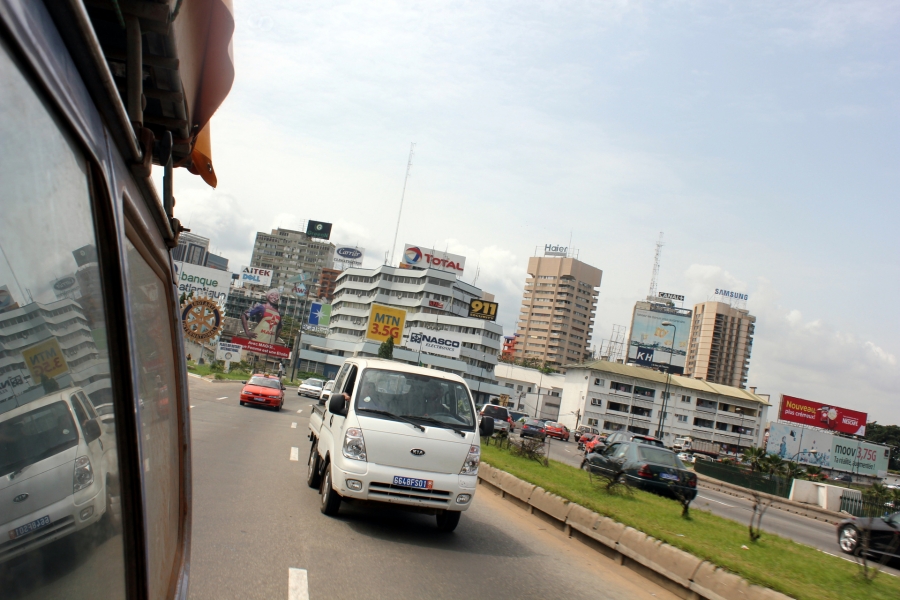 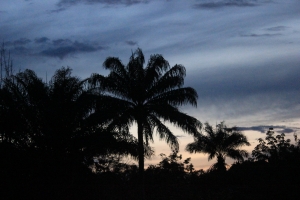 For the route towards Ivory Coast we have to go far through the Liberian hinterland, driving along the coast apparently is barely impossible. Our detour gets greatly rewarded by an incredible landscape. Similar to the last part of Sierra Leone we drive through plain jungle, passing small villages here and there. It is as always on our way: The worse the condition of the road, the more cheerful people are waiving. If it is paved, passengers are nothing special anymore, also one drives way to fast in order to have eye contact. Still, one thing is clear: Nothing is more important for the economic development of the continent than roads. 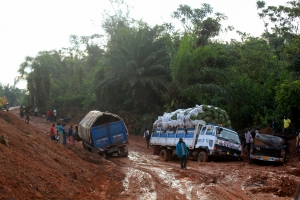 Directly the next day this theory gets confirmed, as we have to stop at the detour of a building site after a night of heavy rainfall: Two trucks half way stuck in the mud block the way. A few minutes later a pickup appears, whose ambitious driver is eager to take care of the situation himself. Despite his offroad vehicle he faces the same faith as the two trucks, getting stuck while trying to drive around them with full speed. The audience is cheering. We wait. Rescue arrives, impersonated by the Chinese. Being responsible for the site, they appear with a whole crowd of machines and clear the situation within 30 minutes.

Filling up in the next village – oldschool, through a tube. The way leads us through the Nimba mountains right at the border triangle of Liberia, Guinea and Ivory Coast. We decide to undertake a hiking tour close to Yekepa. After the road ends, we continue by foot. In the past this region was occupied by a mining company because of the iron ore. After the beginning of the war, they stopped their activities. Today only some rusty, left behind machines as well as the terraced hill tops overgrown by grass bear witness to the past of this region. On the top we have a unique view, overlooking the mountainous hinterland of Liberia and some flat forests in Ivory Coast. We park our car hidden on a small, idyllic plateau. As it gets dark the temperatures decrease and we have the abnormal feeling of being cold. This we enjoy as much as possible until we finally fall asleep in our beloved bus.

In a small village close to the border a harmless action of filling up goes off course: Due to a misunderstanding our tank gets filled by diesel instead of gas. We realize the mistake as our engine pitifully fails after a few seconds. After communicating our feelings of dissatisfaction we get to work. Surrounded by half of the village. We are overloaded with advise and everyone instantly wants to mess around with our car. Only with difficulties we can convince our helpers that we want to make our hands dirty ourselves. We gratefully refuse the well-meant advise to empty the tank directly on the ground and insist at least on an old plastic canister. Jacking up, dismounting, cleaning, mounting, filling up, igniting. Moment of truth. After a couple of tries the motor starts, fights for a minute… and runs!

We enter Ivory Coast together with Gee, who we meet by accident. After 20km of piste a well paved road begins. According to several voices we will find this kind of roads until Nigeria. The first night we spend at the parking lot of Hôtel des Cascades in Man, a city at the foothills of the Nimba mountains.

The next day we face the long drive to Abidjan. On the way we stop at Yamoussoukro, the capital of Ivory Coast. Although the city cannot compete with Abidjan in terms of size and economy, it was selected as capital due to its central location about 30 years ago. The city is also known for its recently built BASILIKA, which is a popular tourist attraction. As a copy of the St. Peter‘s Basilica in Rome it is the second talles church in the world, after the Ulm Minster. We follow part of the MASS and decide that the interior is a little too tawdry. Later we also learn that the large neighbouring building solely was built for one single visit of the pope.

In the afternoon we arrive in Abidjan. Luckily it is Sunday, there is few traffic on the numerous interwoven highway interchanges of the city, that normally suffers massive congestions. Until the early evening we don’t find a place for the night and therefore continue to Grand Bassam, a nice small city next to Abidjan with nice beaches.

The following day can be titled „searching for the lost package“. We expect an important electronic part that has ben sent from Germany by Philipp’s parents to the local DHL branch. As we arrive there is no package. We are told that in Ivory Coast only DHL express is located, and DHL packages without express are handled by the national post. After a long discussion the lady behind the counter agrees on calling the local post. Unfortunately without success. At least she gives us potential addresses to look for our package, the first one leads us to the harbour area. Here all the arriving shipments are forwarded to the different branches. We don’t expect much as we enter the dusty storag. We explain our problem to a friendly lady, who then opens the notebook of majestic dimensions which is lying in front of her. We are quite impressed as we realize that each and every consignment passing the office neatly is documented manually by shipping number and address. Her coworker joins us. He carries a box labeled „Frankfurt“ which contains a huge pile of importation papers for packages from Germany. And indeed: one of the documents carries our shipping number. Then the disappointment: The package is not here but in some postbox at the office in the city center. After making our way through the dense traffic we finally find it, but at the counter we only encounter an official who is in a bad mood. He lets us know that we need a key for opening the post box. Not having the slightest clue how to conjure up such a key we continue explaining ourselves, of course without any success. On our own we find the box – locked – and randomly walk through several offices and back-rooms, until we suddenly receive an collection paper which authorizes us for picking up our package. Back in the lobby we notice that the only responsible person just disappeared for lunch. We do the same. And finally, half an hour later, are leaving the post office carrying our object of desire. Our actual luck we only realize a couple of days later: The package arrived yesterday!

We have enough of the hustle of the big city, also our potential contacts still did not answer us. Thus we go back to Grand Bassam and stay there for one more day, in order to use the indeed very fast internet for a lot of computer work. The next day we move on towards Ghana, passing huge banana and palm oil plantations.

On the way to the border we don’t have any problems, although we are – as always – stopped at each and every police checkpoint. Checking our documents, explaining our purpose, handshake, driving on.