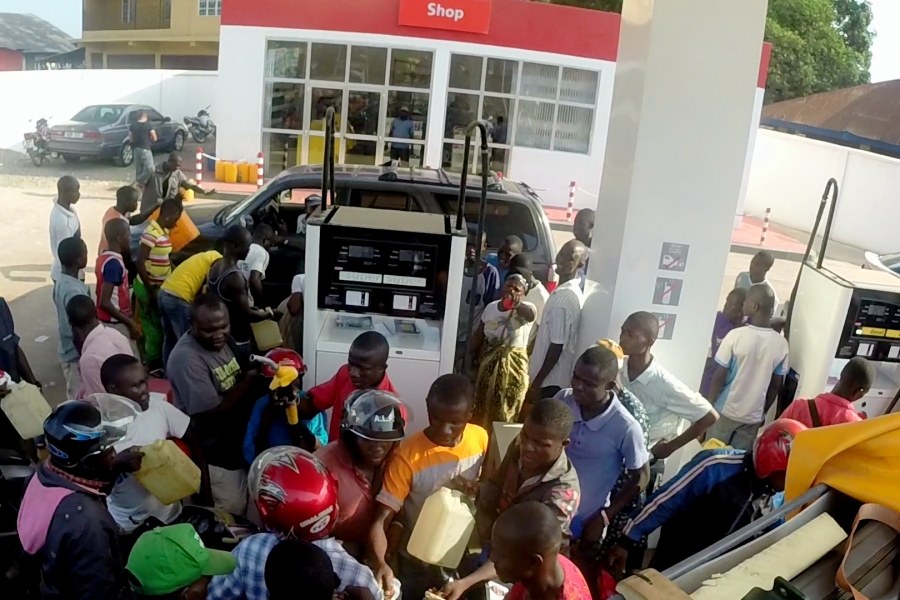 Along the west coast of the Freetown peninsula we continue driving south. The area is known for its idyllic beaches, already several advertisings of popular brands have been recorded here. We make a short stop at Tokeh Beach, an absolute dream beach. During a quick walk we get company: two young boys demonstrate their soccer skills and with excitement talk about gun fishing, a kind of fishing where the rod is replaced by a shotgun. In our eyes not the most decent way to fish…

We arrive at Bureh Beach, a destination for weekend visitors from Freetown and volunteers from all over the country. There we stay for two days at a surf camp recommended by Gee. One clearly recognizes that mass tourism has not yet cast its shade over this pleasing piece of nature. The owner of the camp as well as all of the employees descend from the nearby village. A share of the camp’s profit goes directly in the construction of a school. We feel very comfortable in this environment and get friends with the guys, who run the camp like being a big family. They invite us for dinner as well as their bonfire at the beach. There we get introduced to breadfruit, a round ball from the size of a melon, hard as a stone, which grows on trees. After 10 minutes of lying in glowing coals its inside tastes similar to a cooked potatoe. Also we get to know George, photographer and film maker, who attracted an international surfing competition to Bureh due to some footage of local surfers.

The next passage leads us from Bureh Beach east towards Liberia. The road starts promising, but quickly loses in quality as we get further. In the town of Kenema we want to use the last chance to fill up our tank before getting to the border. Soon we realize that the availability of fuel is not to be taken granted in this remote region. At the first three gas stations we get rejected, only at the fourth and last station of the town we are told that a truck just brough new gasoline. Anyhow we are not the only ones interested in the newly arrived petrol and slowly but steadily have to make our way through a huge crowd of people. Being unsure if the available fuel will be sufficient for all of the waiting, we are very relieved when hearing the last drops of gas falling in our tank.

The last 30km to the border get a lot worse. We camp a few meters next to the road, protected by some bushes and continue our drive early the next morning. At Zimmi, the last village before the border, we get to know the owner of a small workshop during breakfast. Apparently it lies on our way, so we promise to stop by. As we arrive we meet James. A few years ago a British guy taught him how to weld, since then he started to build machines. Right now his major product is cassava grinders – cassava is the basis of most of the traditional dishes in West Africa. Main parts of his machines are the frame and a rotating grinder run by the engine of a motorbike. It works without problems and, as stated by James, the demand currently is good. The simple construction is a result of the fact that it is extremely difficult to acquire material and good tools, and the product even now is still too expensive for many.

Because of a flat tire we continue our drive towards the border with a spare one. Unproblematic border crossing, goodbye photo with a friendly soldier and then back on the road. Literally – thanks to the perfectly paved roads we are again able to drive faster than 15km/h until Monrovia. The landscape changes rapidly: Coming right from the jungle we are suddenly surrounded by palm oil plantations in mono culture, as far as the eye can see. The rain forest is completely vanished. Quickly we arrive Monrovia, the capital of Liberia. Directly we recognize the american influence: Broad highways, chessboard alike city quarters, aside from the Liberty-Dollar the official currency is the US-Dollar. Liberia entertains close relations to the USA, even the flag looks similar. The country is governed by the first African female president, in no other place there is a higher percentage of women working for the government as well as other official positions. We experience the result of this development ourselves: At a couple of checkpoints we encounter an dominant policeman who after some arrogant platitudes gets „roasted“ by its superior female officer.

The first night we stay on the guarded parking space of restaurant À La Laguna. We apply for our Ghana visa and then spread out at a large yard with an infinite number of traders for tires and other spare parts. Finding an appropriate used replacement for our flat one turns out to be an adventure. Of course everyone has the perfect tire, articulating our doubts always results in a smiling merchant – „No problem, no problem“. Of course. Despite all efforts we find our car standing crooked afterwards and ten minutes later we sit at the next shop. We have learned our lesson: This time we buy two tires of exactly the same kind. 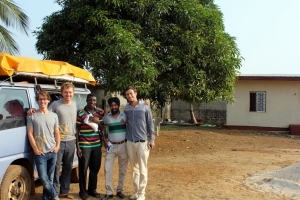 We meet Mr. Singh, expatriate from India and former boss of Philipp during his internship in Ghana two years ago. Meanwhile he quit his work and followed the job offer of an Liberian entrepreneur, for whom he now is building a nail factory. Mr. Singh invites us to his home, where we have a guest room entirely for ourselves. During dinner and breakfast we listen to various storys of the past years, including a stolen safe, police hunts and corrupt security personnel. Also he confirms our suspicions that 99% of the enterprises in Africa are run by Indian or Lebanese people. The following days we have a full schedule:

During a visit of the not yet finished nail factory we get the chance to examine the different machines. Some are already set up for production, others still require repairs since they are already used. The whole places seems clean and organized. In future its purpose is not only the production of nails but also roof sheets and iron rods as well as the packaging boxes. We learn a lot about the planning and building of the factory as well as the production processes. Also included are the curiosities of running a production in Liberia: If a production manager is not present everyday, the own workers might start stealing machine parts. 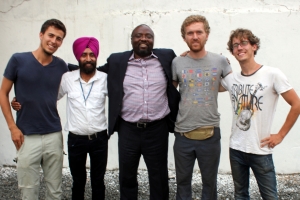 The next day we get to know Alexander Garley, Manager of the company for which Mr. Singh is working. Born in Liberia, he lived in the States for many years and also graduated from university there. With his holding Bever Capital he is represented in many industry fields in Liberia. In the course of two dinners we get to know his family and have enlightning conversations about entrepreneurship in Liberia, the chances of local production as well as being abroad and travelling. Finally we discuss about the question, how it is possible for a workaholic Liberian manager with an own family to realise an Africa crossing despite the veto of his wife… without success.

Searching on the internet, we stumble upon the startup „New African Technologies“. We arrange a meeting and are welcomed by manager Baresh. He is also from India and lives with his Pakistani wife here in Monrovia since a couple of years. He offers installation and maintainance of IT systems and organizes the import of the needed devices. As a huge challenge he mentions the recruiting of suitable technicians. Due to the civil war, which ended roughly ten years ago, the educational level dropped far behind. The government’s current efforts to improve the situation will affect only the next generations. He is also worried about the medical care, as for most surgeries a flight to Ghana or India is neccessary. During the goodbye we exchange a few words with his designer, a Libanese with Italian roots. He is bothered by the fact that companies in Africa are located mostly in the capital and pursues the goal to not follow this trend by starting an own design studio at Robertsport, his city of birth.

Afterwards we drive around in the city and discover an old, abandonned hotel, located on a small hill at the westend. As we park, three uniformed persons appear, explaining us that they will take us up to the rooftop for little money. It is the typical image: As a result of the war many people face the problem of not finding a job, and therefore take every chance they get to make a living. Our guides tell us the story of the hotel while leading us eight floors up to the top. The interior of the building looks like being under construction, it has been completely raided. Each and every object that even is worth the least amount of money has been taken away. However, the view from above is breathtaking! 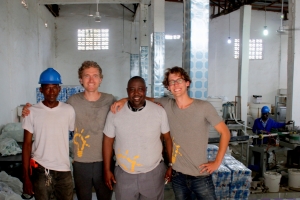 After four days in Monrovia we move further. We say goodbye to Mr. Sing and are very grateful for the warm welcome and his efforts to take care of us. Before leaving the city we pay „National Toiletry Incorporated“ a visit, the only factory for toilet paper in the country. Fomba Trawally, the founder, tells us his unique story: Grown up in a simple environment, he was accepted in Gambia as a refugee after the breakout of the war. A program of the Gambian government gave him the opportunity to return early to his home country, giving him 50 US-Dollars to start a new life. This money he spent for ingredients to produce soap, which he sold in more and more increasing amounts. Later he was able to finance an own shop until he finally saved enough money to build his current factory. We get a tour through the main hall and are intrigued by the simple but efficient production line. As a goodbye gift we are provided generously with toilet paper of the brands „Bendu Tissue“ and „Teddy Bear“.

Again we move on towards east. The next destination: Ivory Coast.