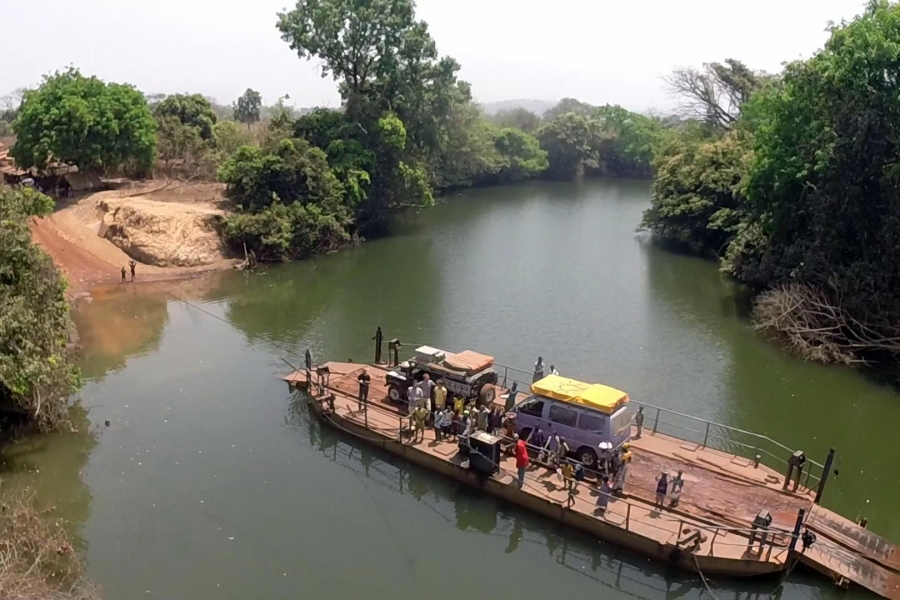 Bissau. Because of our comfortable accomodation, including a very good infrastructure – an own water pump is located on the property as well as a gasoline generator and satellite internet – we stay a couple of days on our parking spot beneath a mango tree. We meet a Bulgarian construction manager who, working for a Serbian company, is leading a building project in Bissau funded by the Chinese government as well as a guy from Switzerland who, together with his girlfriend, travelled to Bissau in a Renault Espace and sold the car – as he said himself – within only a few minutes. Also Gee and Thimba arrive.

We become regular guests in a small bar individually built out of an old container, in the evening always overrun by a crowd of soccer fans enthusiastically following live broadcasts from different African or European leagues. As a result of the language barrier we usually get, instead of some simple french fries, a menu with grilled fish and salad. It tastes excellent. In the direct neighbourhood the Nigerian embassy is located. Thanks to a sympathetic ambassador we receive our visa within few hours.

One of our highlights in Bissau is driving with the Toka Tokas, blue-orange painted minibusses with fixed routes in which up to 16 people find a seat in order to economically travel from A to B. The whole trip is accompanied by loud African pop music.

For Mardi Gras the one and only street to the city center is closed. Forced to undertake a 6 km walk we realize that the phrase „The way is the goal“ in this case indeed is true. Cheerfully crowds of people move towards Bissau wearing crazy and colorful costumes, the sides of the street are completely occupied by small booths selling all kinds of fruit, pastry and drinks. Taking a round trip through the center we witness how the container port – it is the countrie’s only one, almost only cashew nuts and wood are shipped – seems to be very fascinating for the people. Sitting in rows on benches along the pier, they follow with excitement the process of loading and unloading container ships. In the evening we watch a reggae concert, the next afternoon the big parade which indeed is colourful and cheerful, however also characterized by massive presence of police and military. Taking photographs is only allowed with a governmental license.

Bissau – Koundara. In convoi with Gee we depart eastbound and take the northern route to Guinea. Today’s final destination is Koundara. Surprised we realize that the street controls become more and more friendly. After an unproblematic border crossing the whole thing culminates in good-humored police officers giving us fresh mangos subsequent to our chat. On a medium good piste we slowly move towards Koundara, meanwhile small villages with traditional round huts drift past, illuminated by the reddish light of the imminent sunset and surrounded by countless mango trees. We camp in the court of an old house lacking water and energy, and in the evening go out with our friend Gee and have some tasty grilled meat with local beer.

Koundara – Labé. The next day, again in a convoi, we plan to drive from Koundara to Labé, a medium sized city in the heart of Guinea. The route leads right through the jungle on highway currently being built. Crossing several construction sites we constantly identify Chinese supervisors, partially even reaching for the shovel themselves. The major part of the road is neither asphalted nor levelled. As a consequence, we have to fight our way in blistering heat through a hardly passable piste on which the past wet seasons severely left its marks. Scenically though, we indeed get all the more rewarded. During the drive we observe fascinated, how repeatedly regular passenger cars, heavily loaded with people, animals and objects – both inside and on the roof – squeeze past us, with felt full throttle. Highlight of today’s tour ist he ferry cruise across a small river: On a manual ferry with a capacity of two vehicles we slowly are being cranked across the water. Despite the ramps we can set foot on firm ground only after a short way through knee-deep water – for us a premiere.

Labé is filled with people, street stalls and all kinds of vehicles wildly driving around, especially small motorbike taxis neatly winding around the huge potholes. From now on, open sewer along the right and left side of the road belong to the cityscape, which pose a significant danger for every traffic participant. We spend the night on the parkin lot of hotel Tata where we, according to statements from the majority of Africa travelleres, enjoy the best pizza in Guinea – with cheese!

Labé – Conakry. Alone – Gee’s dog Thimba is in dire need of rest – we depart to Conakry, the capital of Guinea. Although the road is asphalted, major sections are in a very bad shape. On the narrow, serpentine road it is impossible to observe the oncoming traffic, thus, instead of bypassing the potholes we are forced to stay on our lane, decelerating to almost zero and accelerating the whole time. But here as well our efforts are rewarded: The curvy mountain road allows us a view over spacious green landscapes with small villages and towns. There are mangos in abundance.

About 30 km before Conakry we find a gigantic building site instead of the main road. After a chat with a truck driver, who explains us that right now it takes two to five hours to get into the city, we change our plan, drive further east and spend the night on in the court of a small motel. There we meet Dante, an American with Italian roots and volunteer for the Peace Corps, who works as a teacher at a school close to the motel. He tells us about the problems oft he local school system: That some students don’t understand him due to a lack of French, and that the education oft he teacher often does not exceed simple practical knowledge. In addition we learn a lot about the country, the people and his personal experiences: Dante talks about a catholic monastery somewhere in the forest and hidden waterfalls, and he says that in Guinea people are big fans of Rihanna.

Conakry – Freetown. During our drive towards Sierra Leone we pass damp valleys, abundantly covered with vegetation. The sunrise, combined with the morning fog of the tropical rain forest creates a unique atmosphere. Close to rivers the sight is reduced to several meters, while passing bridges we barely see the small, wooden fishing boats quietly floating through the water beneath us. Immigration to Sierra Leone takes place without major problems. The usual formalities are handled astonishingly quickly by a smart, young officer. From a friendly woman at the border post we get African names: Max from now on carries the name „Santigie“, Martin „Sorie“ and Philipp „Moliah“ – indeed we get a lot of sympathy points mentioning those during the following controls. For us the only drop of bitterness is the fact, that we, despite intense protest, are treated as a commercial vehicle which of course results in increased fees.

Our next destination: Freetown…