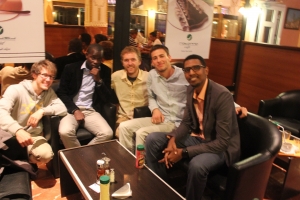 On the last day in Nouakchott we look forward to the meeting with our lokal contacts: We get picked up by car from Mahmoud and Moussa. Together with his friend Ismael, the former plans to establish the first coworking space in Mauritania. At the same time he works on a mobile app for the local telecommunication provider. Moussa on the other hand, a lawyer, tells us about his work for a campaign against the climate change. We learn that parts of Nouckchott are below the sea level and are severly in danger to be flooded, when the water level rises.

Together we drive to the office of their friend Abib, founder of E-Zone, which offers all basic servives in the IT field: From web design, marketing to online orders of individually printed brochures and business cards. Having studied in the US, he tells us that there are a lot of business opportunites that open up to him as a homecomer. At the same time he fights with cheap imitations, since quality awareness is not yet taken too seriously in Mauritania, as he points out.

With Mahmoud and Moussa we move on to a just recently opened up restaurant, which appears to already have gained a hip image among the young people. We are joined by a friend of Mahmoud and Moussa who introduces himself as Ceepee. They grew up togehter in Nouadibou. Now Ceepee is a reggae star, known all over West Africa. We watch one of his music videos on his laptop and witness as two guests of the restaurant come to our table to greet us respectfully and ask him for an autograph. After a short time, he has to leave, but we feel honored by his presence.

With a fairly easy obtained Senegalese Visa in our pocket we leave Nouakchott southwards through an industrial zone. The condition of the road gets worse as we head further. The roughly 300 km become a full day trip. By going west along the Senegal river through the Diawling National Park, we avoid crossing the border at Rosso, which even by locals is described as horror. After 80 km of challenging sand pists we finally arrive the Mauritanian border post at Diama.

Some small booths and two turnpikes convey the image of a laid-back and little frequented border crossing. We are asked for a special fee of ten euros, since the post is allegedly closed. We respond in friendly persistency. A chat from Angela Merkel to Bastian Schweinsteiger begins, at the end of which we are waved through. On the other side we go through the same procedure again.

When we finally are good to go, night has already settled in. We realize that from now on we should refrain from driving at night, because of pot holes and roaming animals. We arrive safely in Saint-Louis, which is also called „African Venice“, due to its special location – the entire urban area is spreads out on multiple islands and hundreds of small gondola style boats, that cruise the channels seperating the islands.

The next day we meet Tayib, manager at the coworking-space Jokkolabs. He gives us deeper insight into the challenges of young founders in Senegal and especially in Saint-Louis. Even though it is home to Senegal’s most renowned university, most of the graduates leave the city, because they see better job opportunities in Dakar. He sees another problem in the mindset of the students, who are rather focused on becoming employee in a big company or the public sector than starting someting themselves. Jokkolabs tries to fight against this by organizing workshops and pitching events, where students learn hands-on about the thrill of being an entrepreneur.

At the afternoon we leave the city to the south. At „Zebrabar“, a camp run by a Swiss couple, we spend the night in an idyllic surrounding. Before we go to sleep we meet Gee, a retired dutch English teacher, who travels with his Land Rover and dog timber – a South-African Ridgeback – to South Africa and along the eastern route back to Europe. We share our experiences and get useful information for our further journey. Then we are joined by Kim, a motorcyclist from South-Korea. We are quite stunned, hearing that he went all the way from Seoul to Senegal alone on his BMW motorbike, hindered just once by a broken rear-wheel damper in Tadjikistan, for which he found replacement in Turkey. He tells us about his plan to head back home soon. When we explain to him our travel route, he sounds enthusiastic and thinks about adapting his journey alike. We share email addresses and are happy to have met two interesting people. 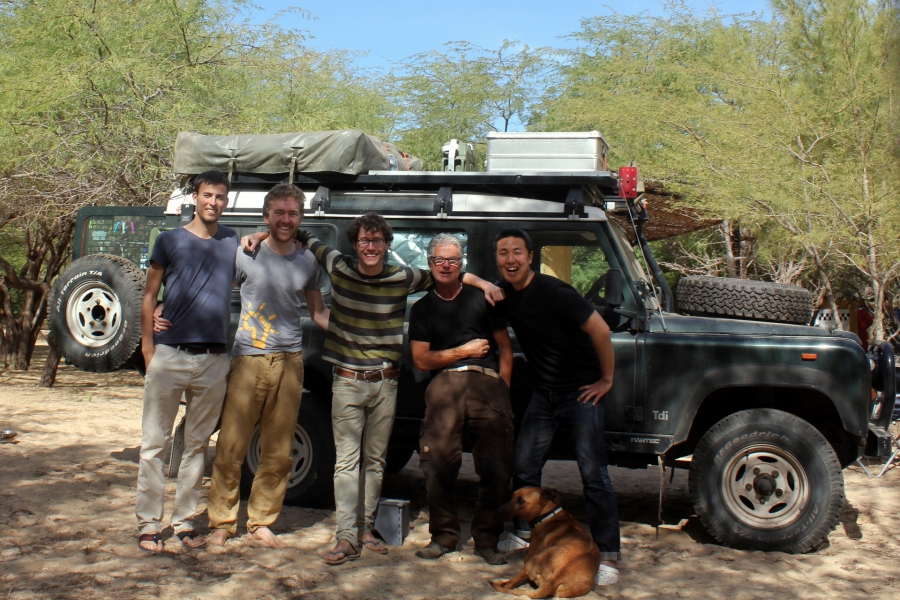 One thought on “Arriving Subsaharan Africa”